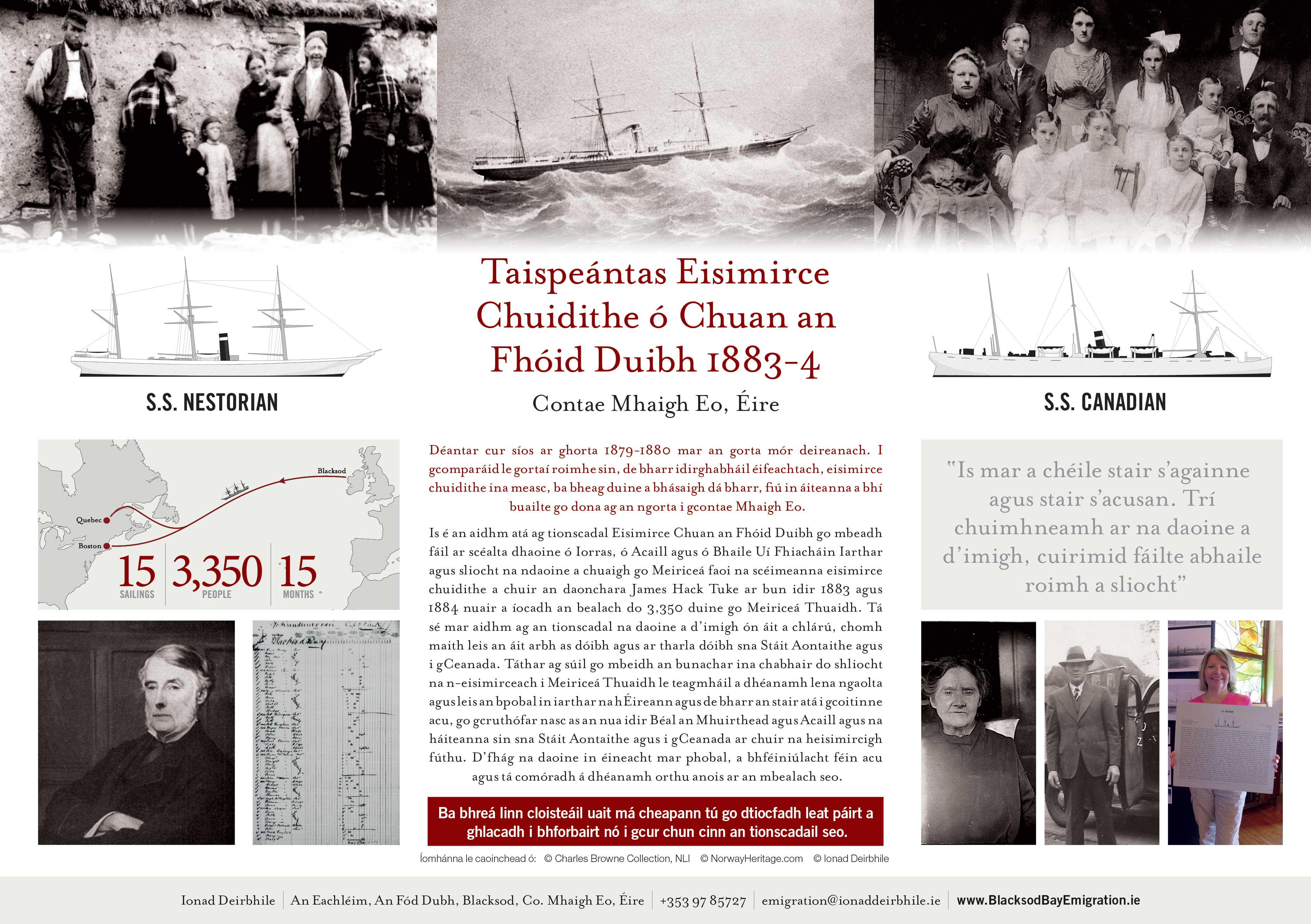 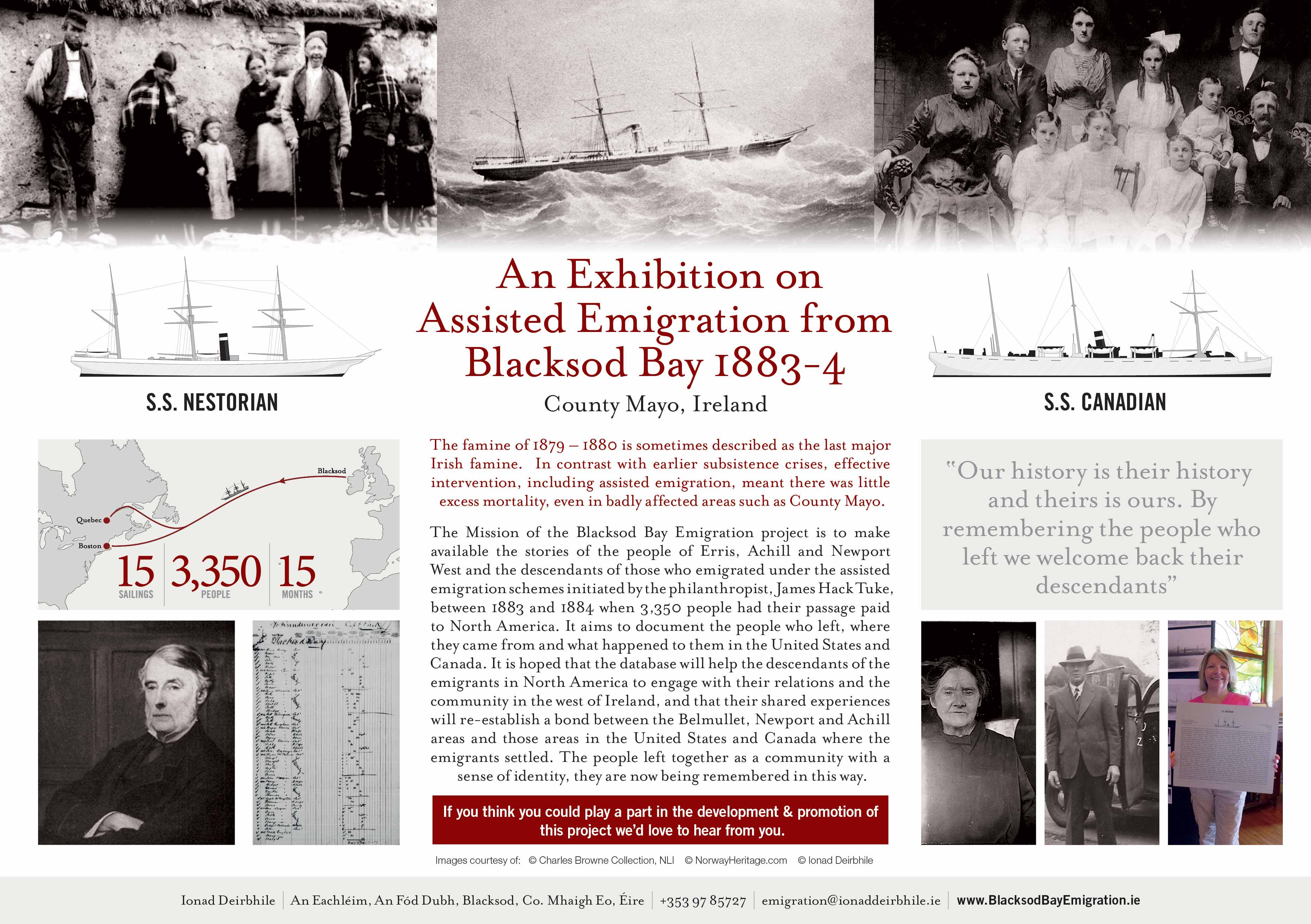 This workshop is open to all interested in learning about genealogical research for beginners. It outlines the various available resources on the internet and the local history of the area utilised by Rosemarie Geraghty throughout her work on the Blacksod Bay Emigration Project – the Tuke Assisted Emigration of 1883-1884 from Blacksod Bay to Boston & Quebec. www.BlacksodBayEmigration.ie

Join us for an overview of the genealogical resources utilised during the Blacksod Bay Emigration Project, including a wide variety of free online resources. Have you relatives who emigrated in 1883-1884 from Ireland. Are your ancestors originally from County Mayo? This workshop will help you discover your roots.

“Our history is their history and theirs is ours. By remembering the people who left we welcome back their descendants” Rosemarie Geraghty SST Paróiste na Cille Móire

Registration: The public should register by emailing Rosemarie to reserve a space.

www.BlacksodBayEmigration.ie has already helped numerous descendants engage with their ancestor’s story and discover their heritage. Some have already returned to Blacksod. Will your family be the next to discover their roots and feature on our descendant’s website? https://blacksodbayemigration.wordpress.com/

We would like to invite you to attend The Erris Gathering 2013.

One of the more picturesque events of next year’s Gathering, surely, will be the opening of a commemorative garden on the shores of Blacksod Bay, Co Mayo.

The garden will honour emigrants who left that beautiful, if economically desolate, part of Ireland in the late 19th century. But although emigration was all-too-common in the area then, the particular event being commemorated was unique in several respects.

When the first 350 people left Blacksod in March 1883, for example, an Irish Times correspondent noted that the scene lacked “the usual display of grief and sorrowful leave-taking” on such occasions.

The reason, in part, may have been that whole families were going together, one of the stipulations of a fund that was paying their fares to Boston and Quebec. On this occasion, at least, there was no need for American wakes, at which parents said goodbye to children they would never see again.

Another principle of the scheme, officially anyway, was that nobody would be forced to go. The fund had been set up in the wake of the Arrears Act of 1882, which allowed for cancellation of outstanding rents. Even so, financial circumstances for many in the “congested districts” remained dire.

As he watched the steamer leave the bay, the IT reporter was in no doubt that this and subsequent migrations would improve the lot both of those who left and those who stayed. “At all events one desirable end will have been attained,” he wrote, “the abolition of many holdings of five and six acres of sterile, boggy land, upon which the people dwelt in wretchedness and dirt.” There was no shortage of take-up, anyway. Between 1883 and 1884, some 3,297 emigrants sailed from Blacksod, mostly for Boston. It is hoped some of their offspring will now return for the opening of the Garden of Remembrance, and a series of related events in late July next, organised around the local Ionad Deirbhile Heritage Centre.

Background circumstances aside, the Blacksod emigrations were also unusual for the manner of departure. Although the bay was then, as it remains, of the best natural anchorages in Europe, it had no quayside from which passengers could embark.

Instead, emigrants had to be taken out in rowboats and other smaller vessels to the deeper water where the main ship awaited.

But what may give an added poignancy to next year’s commemorations is that, at the end of the 19th century, thanks to its natural advantages, Blacksod Bay appeared poised for maritime greatness.

During the first decade of the 20th century, it was mooted as the terminus of a new shipping route that would, as one commentator put it, “make Ireland the highroad of traffic between Canada and the United Kingdom and between the Eastern and Western Worlds”.

Galway was in the running too. But by 1911, Blacksod Bay was favourite for a scheme that would have seen Liverpool ousted not just as the transatlantic departure point for British passenger traffic, but for Scandinavia too. With the provision of rail ferries from Holyhead, it was even predicted that, soon, Londoners would leave Euston Station and not have to set foot outside their carriages until Mayo.

In November 1913, newspapers reported that construction of the harbour at Blacksod Bay would almost certainly commence in the new year and that, in the words of a former local MP, its effects on world commerce would outdo “the Panama Canal”.

As late as 1915, although construction still hadn’t started, the British Royal Academy featured designs of a magnificent Blacksod Bay Railway Terminus, to be built on a reef jutting into the harbour, from where passengers would board the world’s largest liners.

But events on mainland Europe had by then taken an unfortunate turn. And even though war gave Blacksod Bay another chance to demonstrate its worth – the North Atlantic Fleet anchored there – time and tide was running out on the need for express shipping lanes between Britain and its “colonies”.

The Blacksod Bay commemorative events will take place between July 21st and 27th next, and you can find out more from ionaddeirbhile.ie. Further down the west coast, meanwhile, and slightly later in the summer, the island of Inis Mór will be also hosting a new event, in this case literary.

It follows a meeting in Galway last week, advertising which (Irishman’s Diary November 29th) we lamented that, almost alone of his generation of writers, Liam O’Flaherty did not have a summer school or festival in his honour. No longer. The first annual Liam O’Flaherty Weekend is now tentatively scheduled to take place some time around August 28th, his birthday. 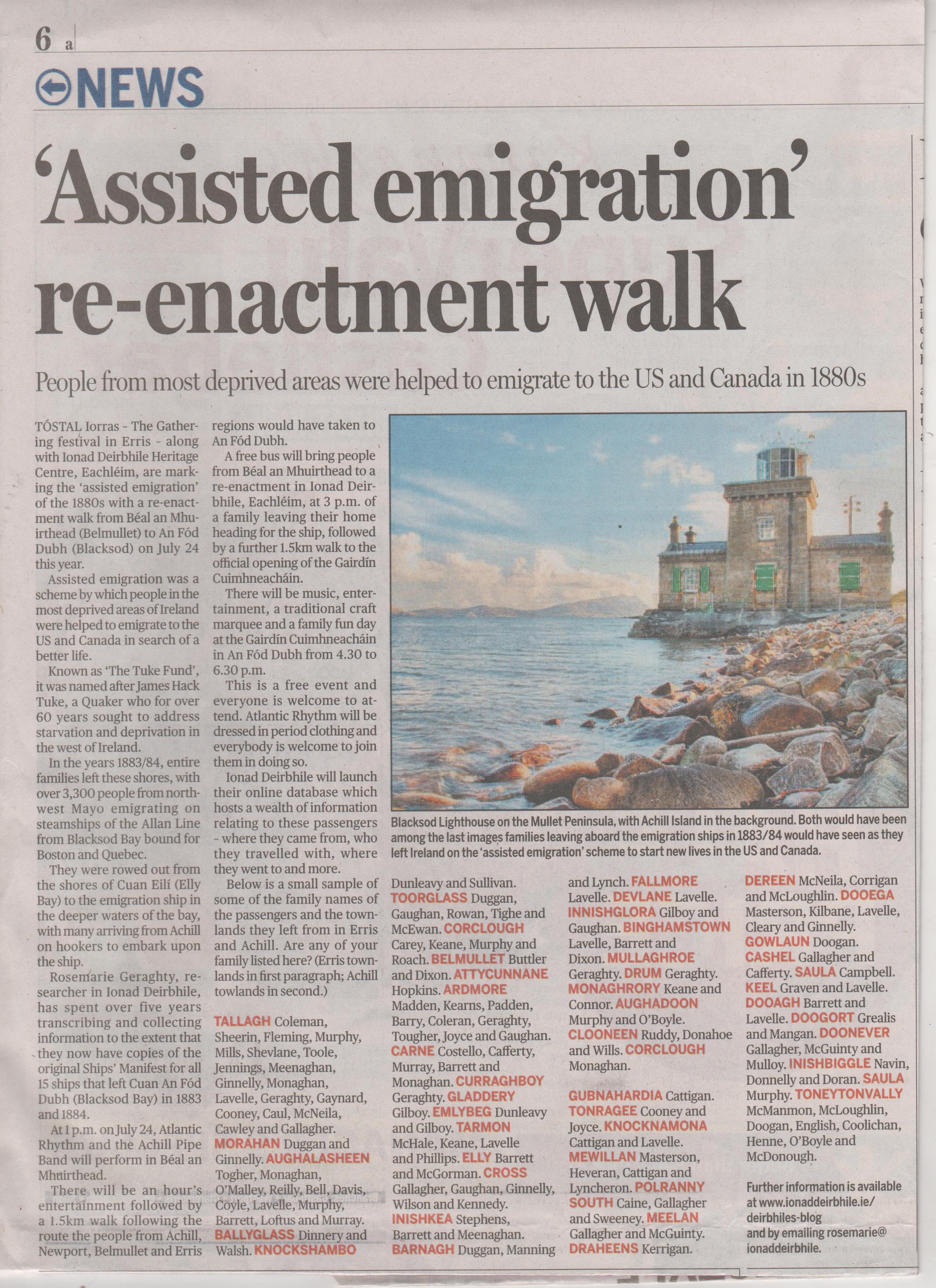 The Assisted Emigration was a scheme by which people in the most deprived areas of Ireland were helped to emigrate to the U.S. and Canada in search of a better life. Known as “The Tuke Fund” it was named after James Hack Tuke, a Quaker who for over 60 years sought to address starvation and deprivation in the West of Ireland.

Between the years 1883-84 entire families left these shores with over 3,300 people from North West Mayo emigrating on steamships of the “Allan Line” from Blacksod Bay bound for Boston and Quebec.

They were rowed out from the shores of Cuan Eilí, Elly Bay to the emigration ship in the deeper waters of the bay with many arriving from Achill on Hookers to embark the ship.

Rosemarie Geraghty researcher in Ionad Deirbhile Heritage Centre has spent over 5 year transcribing and collecting information to the extent that they now have copies of the original Ships’ Manifest for all 15 ships that left Cuan an Fód Dubh, Blacksod Bay in 1883 – 1884.

At 1pm on July 24th Atlantic Rhythm and Achill Pipe Band will perform in Béal an Mhuirthead. There will be an hour’s entertainment followed by a 1.5km walk following the route these people from Achill, Newport, Belmullet & Erris regionss would have taken to An Fód Dubh. A free bus will bring people from Béal an Mhuirthead, to a re-enactment in Ionad Deirbhile, Eachléim at 3pm – a family leaving their home heading for the ship, followed by a further 1.5km walk to the Official Opening of the Gairdín Cuimhneacháin in An Fód Dubh. There will be music, entertainment, a traditional craft marquee and a Family Fun Day at the Gairdín Cuimhneacháin in An Fód Dubh from 4.30pm – 6.30pm. This is a free event and everyone is welcome to attend. Atlantic rhythm will be dressed in period clothing and everybody is welcome to join them in doing so.

Ionad Deirbhile will be launching their online database which hosts a wealth of information relating to these passengers, where they came from, who they travelled with, where they went to and more. Here is a small sample of some of the family names of the passengers and the townlands they left from. Are any of your family listed here?

Did you know that the 1901 and 1911 Census of Ireland is available free of charge on the National Archives website . Search by name or Browse by place.

The Mullet Peninsula is currently divided into D.E.D. (District Electoral Division) Binghamstown North and Binghamstown South. At the time of the 1901,1911 Census Belmullet D.E.D. also covered townlands on the peninsula.